For inquiries, auditioning and orders for the all-new Cayin N6ii DAP in The Netherlands contact us at. “auditions@glorioussound.com”  (auditioning showrooms in Amsterdam, Haarlem and adding new dealers in the near future)  The Cayin N6II is also now available for orders

At head-fi review and tech sites, people are raving about the possibilities and sound of the new Cayin N6ii DAP, (Digital Audio player). Sometimes referred to as Cayin N6 mk2

The Cayin brand is a part of  Zhuhai Spark Electronic Equipment Co., Ltd. and was founded in 1993. Famous for High-End Audio components especially based on their  tube amplifiers, started in 2013 with design and production of a series of portable headphone products and Digital Audio Players (DAP)

With the introduction of the Cayin N6II and Cayin appointed  glorioussound.com as their Dutch distributor. Glorious Sound promotes and sells all  Portable Audio equipment made by Cayin, but the firts focus will be both the Cayin N6ii and the reference TOTL Cayin N8 alongside the praised Cayin N5ii.

In Europe reviewers such as Lieven at headfonia.com were amongst the first to get there hands (and ears) on the all-new Cayin N6ii.

Streaming Tidal, Qobuz and Spotify and more with the Cayin N6ii DAP

The Cayin N6ii is the latest Android 8.1 based Digital Audio Player. Complete with the  Google Play pre-installed and bypassing the Android system for audio with Direct Transport Audio (DTA).

With the introduction of Android Oreo, it opened up possibilities for audio players the make use of everything the Google Play Store has to offer.    Options like apps for Soundcloud, Bandcamp, Cloud-based music and Chromecast, etc. are all available

Borrowing some of the design of the flagship, top of the line Cayin N8 the new Cayin N6ii has a unique approach compared to other high ends DAP’s by iBasso, Astell & Kern, Fiio and Sony.

The Cayin N6ii  has a completely upgradable “entire audio motherboard”. This Audio Motherboard consists of the DAC and analog amplification circuit and is user-replaceable without any hassle.

Can a Digital Audio Player like the Cayin N6ii play native DSD? 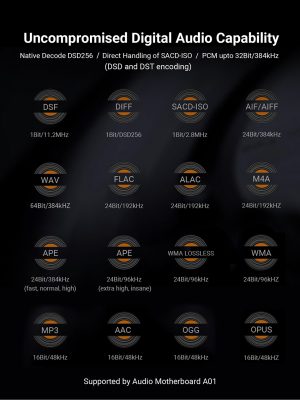 How can you connect your headphones, earphones / in-ear Monitors, active speakers or home audio components?

The Cayin works with single-ended and balanced with  3.5 mm and 4.4 mm, for both headphones as a line-out.

One other very convenient feature is de USB Audio In or Out and the i2s OUT.  So the DAP can also be used in a High-End system as a source with an external DAC.